Insta360 announced today X3, a 360° action camera built for the social age. Millions of people worldwide now consider themselves “creators”, and there’s no better device for capturing creative and unique content for social media, handheld or installed on your drone.

With a new 1/2″ sensor and a 2.29” touchscreen, Insta360 X3 is the most powerful camera you can carry in your pocket. Capture 5.7K 360 video with Active HDR and the Invisible Selfie Stick effect, or 72MP photos with stunning details. X3 doubles as a standard action cam with Single-Lens Mode upgraded to sharp, ultra-wide 4K. For editing your shots, the Insta360 app is an AI powerhouse with intuitive reframing tools for making magic out of the action.

Insta360 X3 transforms the way creators approach the creative process. By shooting first in 360 degrees and then reframing later, one video can be edited in endless different ways. You’ll always be able to capture your best moments, whether catching a big wave or landing a tough trick. Simply mount up, hit record, and frame later in the Insta360 App -thanks to 360 capture, a 4:5 Instagram post can be turned into a 9:16 TikTok video in a tap without losing quality.

X3’s 360 video quality has also improved with the new Active HDR mode, powered by the camera’s new 1/2″ sensor. Active HDR uses an innovative algorithm to stabilize action footage, minimizing ghosting and revealing details that other action cams miss in over and underexposed areas. 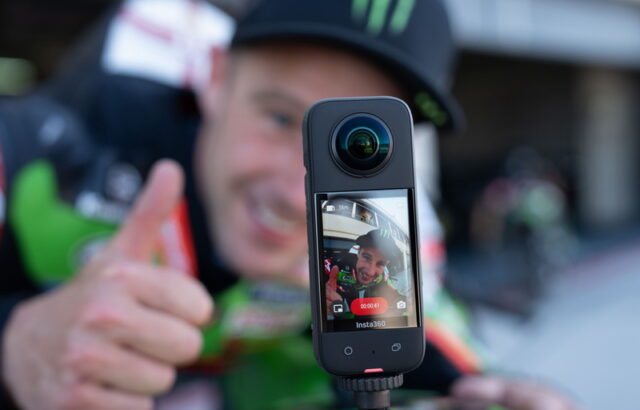 The dual lens design also enables effects like the Invisible Selfie Stick, where the stick is automatically stitched out of the footage, creating impossible third-person views. With “Me Mode”, you can now shoot epic invisible selfie shots at 60fps without reframing. This mode frames the footage to focus on you while keeping the selfie stick invisible. Never before have invisible selfie stick shots been possible without recording in 360 first and reframing later.

Single-Lens Mode can’t be beaten when you’ve got a clear vision for your content that only requires one point of view. Now upgraded to 4K resolution, this mode is perfect for immersive first-person views of the action, especially chest-mounted shots. A new extremely wide 170° MaxView is also available at 2.7K for even more immersive POVs.

X3 camera delivers the most megapixels ever in a 360-action cam with 72MP photos for ultra-detailed stills. It also captures 8K 360 time-lapses, perfect for cityscapes and landscapes alike.

Bullet Time, the Matrix-like slow motion effect made possible by swinging the camera over your head in a circle, has boosted resolution and frame rates to 4K 120fps and 3K 180fps.

Throughout all the action, X3’s six-axis gyroscope and FlowState stabilization keep your video ultra-stable. Where other action cams tap out at 45°, 360° Horizon Lock keeps the horizon level even when you rotate the camera entirely. 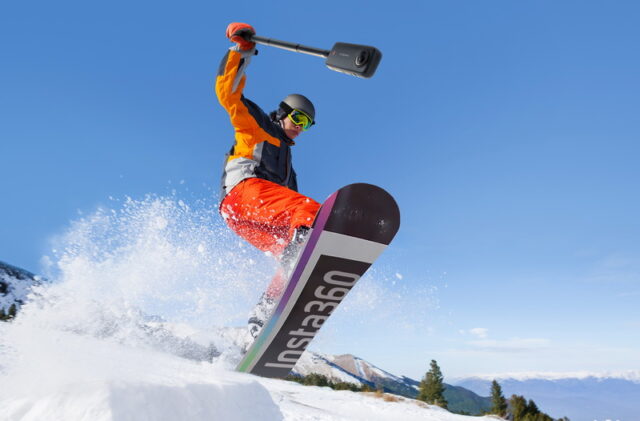 Insta360 X3 is rugged and waterproof to 33ft (10m) out of the box. Lens guards are also available for action sports creators who want increased protection.

Even when you don’t know when the action will happen, X3 will catch it. The new Loop Recording mode transforms X3 into a dashcam, continuously recording video but only saving the final minutes according to your set interval, saving precious space on your memory card.

Insta360 X3 maintains the same “candybar” shape as its predecessors while adding key upgrades to make it easier to operate, especially during the action:

A 2.29” tempered glass touchscreen for intuitive settings adjustments and previews.
Four buttons make it easy to control your shot even when gloved up.
Direction Focus audio ensures the audio follows the action, even when you reframe.
A powerful new 1800mAh battery keeps the camera powered through the action.

The Insta360 mobile app uses AI technology to democratize content creation, putting tools and effects at creators’ fingertips that might otherwise take years of experience to master. In Shot Lab, creators can find 30+ viral-worthy effects that can be edited in just a few taps—from the goofy Nose Mode to the new cinematic Street Lapse to the just plain cool Sky Swap. 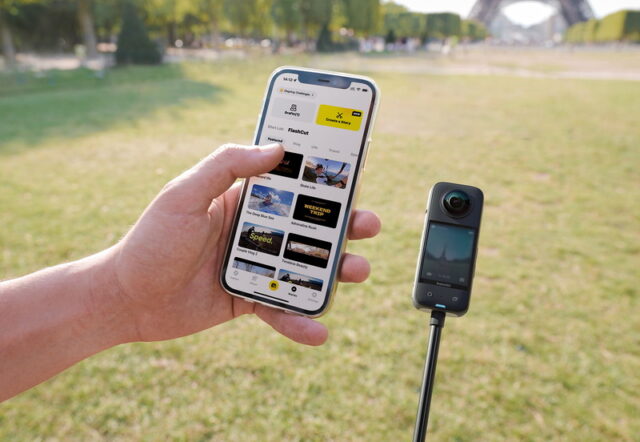 Reframing your video is up to you, whether by physically moving your phone in the direction you want to point with Snap Wizard, selecting a target to track with Deep Track 2.0, or letting the AI pick out the highlights for your Auto Frame. Photos can get the magic treatment, too, with the new Photo Animator, which animates a static photo for you.

Insta360 Studio is also available for precise controls and maximized resolution for creators who prefer a desktop workflow.

Insta360 X3 is available to order globally from September 8, 2022, via Insta360.com, Amazon (U.S., Europe, and Japan), and select retailers. It retails for US$449.99. Accessories sold separately include lens guards, an invisible cold shoe, a mic adapter, and the Quick Reader.

Sony RX0II: Is it a better drone camera than the GoPro 10?

Can You Fly a Drone in Golden Gate Park? – Droneblog